A Letter to You from Satan 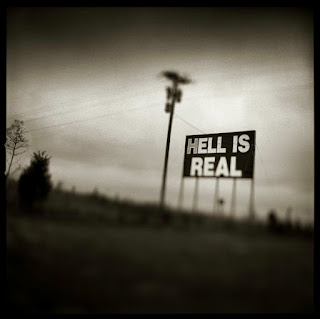 Hey you all! Halloween has passed and every year I go to a drama called “Hell Night” in Kansas City, KS. It is so awesome. We all hear about heaven and hell but many times we forget that hell is real and not a place of fiction. As I talk more about it, keep in mind that it is because of Love that Jesus took our place on the cross and it is because of love that we choose to accept and live for him, not a fear of hell.

Unlike Halloween, which comes once a year with fictitious characters and fake devil horns, hell is every day with a real devil, real demons and fire that is hotter than any fire on this earth. To be more specific, it last for eternity. Do you know what that means? It means Forever! Although hell was only made for the devil and his demons, unfortunately many people have chose and continue to choose this place as a permanent address. This post is to expose the enemy and help people choose life instead. The bible clearly states those who will not enter the gates of Heaven. Check it out

The acts of the flesh are obvious:

I will tell you something else that will keep people out of heaven…Being a luke-warm Christian!!

Revelations 3:15 “I know your deeds, that you are neither cold nor hot. I wish you were either one or the other! So, because you are lukewarm—neither hot nor cold—I am about to spit you out of my mouth.“

God respects an atheist more than a luke warm christian. SAY WHAT?! Let me explain. God knows where an atheist stands. He knows exactly what they are choosing to believe, but lukewarm, He can’t stand because that person has not fully given themselves to Him. They have not picked a side, instead, trying to stand in the middle. We are either for him or against him. It’s better to never have known his power than to know it and deny it.

Lukewarm is having one foot in and one foot out. For example, living one day as if you don’t know God and then the next day putting on a front just to be in the assembly of worship on Sunday morning. I struggled with this and I was honest to God about it. I had a willing heart to change so God sat me down and lovingly set me straight. He had to isolate me from the world and some friends and I’m so glad He did 🙂 He will do it for you if you desire Him to.

The truth is, we are all on that list above. This is because we were all born sinners, choosing to do wrong from the beginning. Because of this inherent sin, we deserve death and separation from God, but God’s love said otherwise.

You could have put my name next to almost every one of them on that list, but I chose to get off. I asked Jesus to save me from my sin and instead of just confessing with my lips, I let Him change my hear